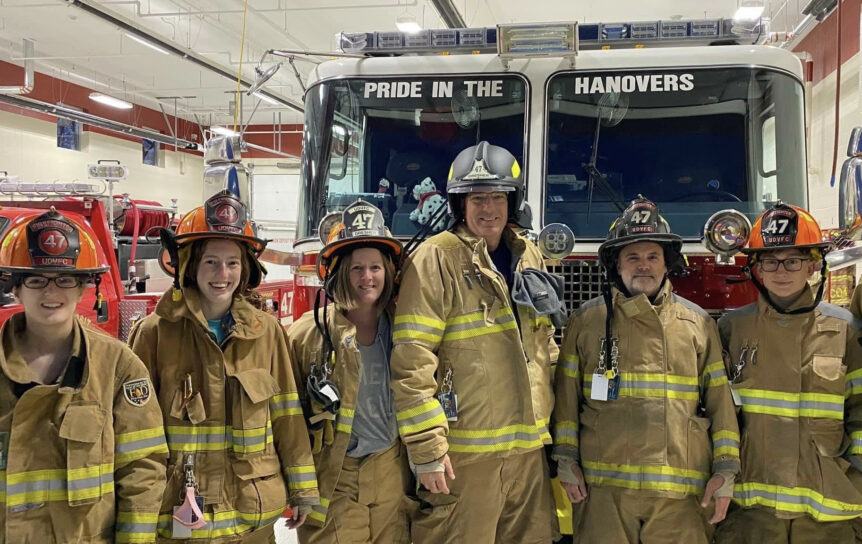 Andrew Dresher was taking photographs of rising waters during a 2011 flood as a freelance photographer, when the South Hanover Fire Company 47 fire chief approached him and asked him to join.

“All you have to do is take photos,” the chief said to Andrew on that day in September 2011.

Andrew joined, but ended up contributing a lot more than just his photography skills to the fire company since then.

“We need you to put the camera down and go to work,” the company told him when a greater need for volunteers came up.

Andrew, who says he never dreamed he’d be a firefighter, took classes in 2012 and ’13, became a full-fledged volunteer firefighter at age 46 and eventually became President of the fire company.

“It’s very rewarding to know that you’re helping somebody,” Andrew said. “Sense of pride, accomplishment, values and purpose come from doing this work.” 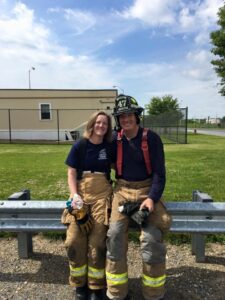 Andrew and his wife, Tami

Not only is he the company’s president, the rest of the Dresher family eventually joined him. His wife of 30 years, Tami, became a member in 2012 and is now a black helmet firefighter, who also volunteers with fire police and is highly active in fundraising for the company. His oldest daughter, 23-year-old Grace, is following in her dad’s initial footsteps as the company’s official photographer. His youngest daughter, 22-year-old Brooke, just graduated from fire school about a month ago.

“When the pager goes, we all go — no more just dad leaving,” Andrew exclaimed.

Brooke Dresher says that her and her sister spent a lot of their adolescent years around firefighters because of their parents’ mid-life commitment to fire service, and decided to join as soon as they were old enough.

“I enjoy the ability to be someone’s hero,” Brooke said. “I love that I am able to help someone and assure them that everything will be OK in the end.”

Brooke, who works at Starbucks when she’s not fighting fires, says her dad has always encouraged her to continue advancing in fire service. Initially she wasn’t going to go through with her mods, but between her dad cheering her on — literally in some instances as he took photos — and realizing she wanted to contribute more to the department, she went through with it.

Besides diving deeper into fire service than she anticipated, Brooke wasn’t a natural when it came to doing one of the first tasks that comes to mind for a firefighter.

“I had a major fear of ladders when I was going through my Mod C (Exterior Firefighting),” she said. “By the end, I climbed up to the roof of a five-story building!”

She says she still fears ladders to an extent, but that fellow firefighters will always help through any fears you may have, as many at South Hanover Fire Company 47 have done for her. And one of her biggest fans is certainly her dad.

“That’s my baby girl; she can go into real fires like I do,” Andrew said.

Andrew says the sense of pride, accomplishment, values and purpose, as well as the need to serve is what keeps him motivated.

“People initially can’t believe we do this for free,” Andrew explained. “But there’s a natural need to want to serve; it’s a huge emotional fulfillment.”

And I guess one could say the family has adopted that mantra as well.

If you want to Step Up, Gear Up and Volunteer, visit https://capitalregionfirefighter.org/ to learn more about volunteer firefighting and the many ways you can help make a difference in your community. Fill out the inquiry form and a representative from your local Capital Region fire company will contact you and answer any questions you may have within 24-48 hours.