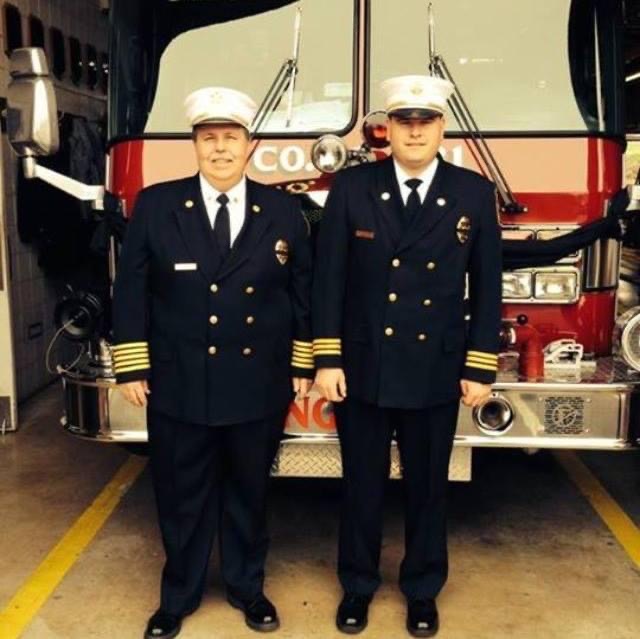 Ben McDonald has known the Silver Spring Community Fire Co for as long as he can remember. His dad, Doug, has been with the department for more than 40 years, and became fire chief in 1987, a year before Ben was born.

“I was always exposed to the fire station. I rode with my dad on calls and he always did what he could do to let me do things,” Ben said.

As Ben got older, he always knew he’d likely end up in emergency medical service. Growing up, not only was his dad a volunteer firefighter, his mom was an ambulance chief and his stepfather was a police officer. And not only did he end up in the EMS field — he’s worked as an EMT and a 9/11 dispatcher — he succeeded his dad as fire chief of Silver Spring in 2019.

Ben credits his dad for giving him the confidence that he could be a successful firefighter and for never settling for less. 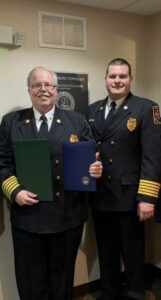 “He has been a big influence of pushing me into those higher levels of education within the fire service and not just settling for being mediocre or just having the basics. It’s always been a push for me to be better and be more educated, always advancing,” Ben said.

When the time came for Doug to retire in 2019, he knew his son would make a great successor. He said over time he came to realize that Ben was ready, but he referenced one call in particular where he knew that his son was made to succeed. Ben was unofficially in charge at the time as Doug was easing his way back from medical leave. Afterwards, Doug listened to the tape of the call — a restaurant that burned down — and knew his son could follow in his footsteps.

“Ben’s presence in those moments, that’s when I started to think, ‘This is it, he’s doing it,’ and that eased the transition once I saw he had matured that far,” Doug explained.

In early 2020, the department held its annual banquet, which recognized Doug’s 2019 retirement. That night, Doug gave a presentation to the audience, and Ben says he’ll always remember what his dad told those in attendance.

“He told an audience of over 100 people that he knew I was ready [to be fire chief],” Ben explained. “For your hero to turn around and say that you’re ready, that you’re educated enough and that they believe in you, it really stuck with me and was something that was very special to me.”

Not only does Doug say his son’s calmness under pressure is one of his son’s best qualities (though Ben says his dad is the calmer of the two), he also cites Ben’s ability to lead and maintain a department of volunteers.

“Ben’s mantra is that we need to take care of our people,” Doug explained. “The volunteer fire service is having trouble attracting people, and we need to be more aware of how they [current volunteers] are feeling, dealing with issues, to a point where you have to be more aware of their personal lives. Ben has gotten very good at developing that rapport.”

Both men are passionate about fire service. Doug — who recalls riding his bike by Citizens Fire Co. as a young kid in the 1960s — says one thing that kept him involved for so many years was knowing that he was making a difference in the lives of the younger generations.

“One of the thing I enjoy the most is teaching and mentoring young members,” Doug said.

“Sitting in front of the children and teaching them about smoke detectors, evacuation procedures, what a firefighter looks like and not to be scared, that kind of thing drives me to keep doing this along with keeping up the family tradition,” Ben chimed in.

Father and son enjoy spending time with Ben’s two young children, taking care of the family farmette, and hunting— particularly a hunting trip they take together every December. Their bond is more than just fire service, but Ben can’t say enough about the encouragement and wisdom he’s always received from his dad.

If you’d like to “Step Up, Gear Up and Volunteer,” visit the Contact section of our website and fill out an inquiry form! It’ll be sent to your local Capital Region Firefighter company and somebody will get back to you within 24-48 hours.