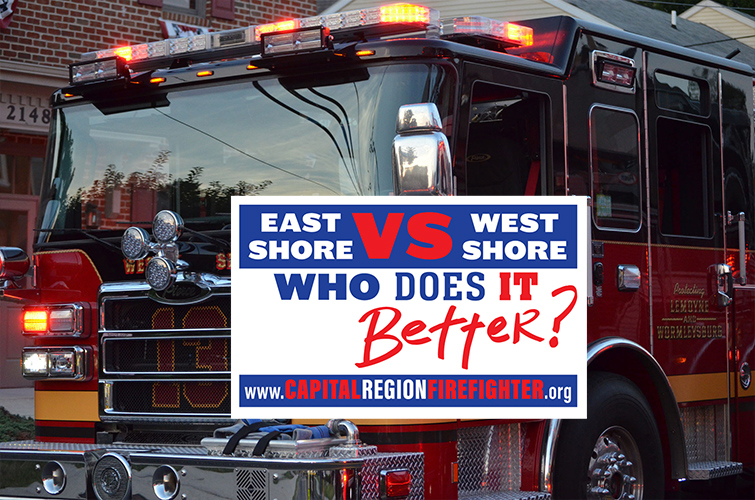 September 12, Harrisburg, PA…The East Shore and The West Shore of the Capital Region are separated by the Susquehanna River, and longtime residents from both sides will tell you that their side is the best side when it comes to food, entertainment, driving time to Harrisburg, and much more. And now, another competition for bragging rights is officially underway.

East Shore vs. West Shore — Who Does It Better? will be a friendly battle between volunteer fire companies on each side of the river to find out which shore reigns supreme in regards to volunteer firefighter recruitment.

This competition is being spearheaded by www.CapitalRegionFirefighter.org , a volunteer recruitment campaign that launched last spring through a $2.2 million, four-year grant from FEMA awarded to the Capital Region Council of Governments (CapCOG). The campaign has united almost two dozen East and West Shore fire companies, but now the two shores will compete for the bragging rights of being the superior shore at volunteer firefighter recruitment.

“Here on the East Shore, all the major highways convene. Plus, we have Hershey Park travelers, and that translates into a lot of rescue incidents on the roads,” said Michael Ibberson, fire chief of Swatara Fire and Rescue, a company with four stations on the East Shore. “However, you can’t go wrong volunteering on either side of the river. We both have structural fires, water rescues, and other lifesaving calls.”

“There is such a variety [on the West Shore] from rural, suburban, industrial, manufacturing in which the local fire company is a vital part of — members have to see it as an all hazards approach,” said Curtis Hall, fire chief of New Kingstown Fire Company on the West Shore.

Fire companies on both shores provide free training and gear.

Beginning on September 12, until the end of the year, fire companies will track the amount of inquiries they receive through Capital Region Firefighter’s website and Facebook page. The shore with the most inquiries will be declared the winner.

To build momentum, fire companies are exhibiting at community events and hosting open houses, and chiefs from each shore are making themselves available for media interviews. Recruitment ads are also running on local sports networks and being shared on social media.

Residents get their side of the river to recruitment victory by sharing digital content posted Capital Region Firefighter’s website and social media pages.

Both the East Shore and the West Shore share the same goal — meet and recruit new volunteers to an area of public service that has seen decreasing numbers not just in the Capital Region and Pennsylvania, but across the US.

“We’re hoping that ordinary people will join and help make a difference in their community by becoming volunteer firefighters,” said Scott Ryno, program manager of the campaign.

To fill out a Volunteer Inquiry Form, visit our Contact/Join Us page.

Editor’s note: To arrange for interviews or fire drill demonstrations with fire companies on the East or West Shore call 215-884-6499.